7th February 2020 - Tonight we had our first internal competition of the year with Nick Jenkins judging.
25th October 2019 - We had our Annual Competition tonight which was judged by Dennis Russ. A very good evening with some great photography making Dennis's job more difficult to choose a winner in each section.
4th October 2019 - Prints and DPI's were collected tonight for our Annual Competition, should be a good night.
20th September 2019 - Well done to Norman Cahill for winning the Panel of Three, Barry Hill was the Judge.
22nd September 2018 - Barry Hill won The Panel of Three, judged by Lynfold Halett.
1st November 2017 - Well done to Lynford Hallett for getting his AFIAP
26th May 2017 - A excellent presentation with Malcolm Kingswell AWPF, DPAGB, EFIAP this evening showing a wide selection of both colour and monochrome images of his travels and street photography, and finally finishing off the evening with a slideshow of his famous bird photos.
25th June 2016 - Although our club has stopped meeting at the Community Centre for the summer break, we are still meeting up on a Friday evening for various trips out to take photographs. See Programme for our autumn list of events back at the Community Centre.
23rd June 2016 - Lynford has had more success with the Photographic Salons, this time in Bulgaria having 6 out of his 8 images accepted with 'Poker Face' receiving a GPU Silver award.
1st February 2016 - Well done to Lynford who has had all four of his entries accepted into the Maitland Photographic Salon in Australia.
6th October 2015 - Lyn Hallett had five of his images accepted into the Swansea International Salon.
10th September 2015 - Lynford Hallett had one of images images chosen to represent the WPF in the forthcoming Celtic Challenge.
September 2015 - Two out of Six Photographers chosen to represent Wales in the PAGB Inter Federation Competition were from our Club, so well done to those.
27th June 2015 - Well done to Lynford Hallett who had 5 of his entries accepted into the Winchester National Exbition, where there were 3800 entries and only 800 of these would be accepted.
12th June 2015 - Many thanks to Norman and Lyn for organising the two models for tonight at the club.
6th June 2015 - Another good result for our club today wit the Barrian Cup held at Barry Camera Club. We managed 8th position out of 26 clubs.
1st June 2015 - Well done to all those who had images entered into the Swansea 10 Way Battle, giving us 3rd place out of 10.
29th April 2015 - Well done to Dan Stickler for having one of his images accepted into the Neath Photographic Salon.
26th March 2015 - Well done to Barry, Lynford, Norman and Alan for getting images accepted into the 2015 Welsh Salon, with two of them getting HC. 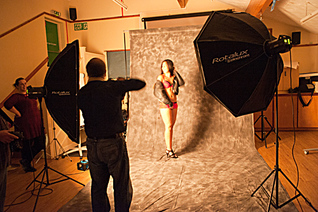 15th March 2015 - Well done to Lyn who had one of his images 'Quiet Contemplation' accepted into the recent Bristol International Salon.

23rd December 2014 - Congratulations to Lynford Hallett for having his image 'Faith' accepted into the Yorkshire Salon.

6th December 2014 - We had a good result at today Stanley Chell Photo competition, coming a joint 4th with Gwynfa and Cwnbran with two of our images scoring 20 points each.


28th November 2014 - Another good portraite night ran by Nigel and Geraldine, plus Jessica was a very good model. 17th October 2014 - Many thanks to Les Loosemore, who judged our Annual Comp giving every image a very in-dept critque.

12th October 2014 - Well done to Lynford Hallett who had 3 images accepted into the recent South Devon Photo Salon, one of these images was 'Pondering' which also won best Monochome Print at the recent Bridgend 12 Way battle.

8th October 2014 - We had a a good evening at the Bridgend 12 Way battle this evening coming a joint 5th, plus Lynford Hallet won best monochrome print of the evening with 'Pondering', see scores here.

19th September 2014 - Well done to Barrie for winning our Panel of Three competition and to Peter Harman for coming a close second.

12th September 2014 - A good evening was had looking at everyones images that we had taken during our summer break, plus we managed to sort out prints for our forthcoming battle at Bridgend.

25th June 2014 - After our final club comp of the year, we can now add up the scores. With Many Thanks to Peter Harman for keeping the tally going and recording the scores on the night. Click here to view a PDF of the final scorsheet.

14th June 2014 - At todays Barrian Cup we managed 93 points, making us joint 2nd with Ebbw Vale C.C. Well done to all those who put their images forward for this comp.

30th May 2014 - Another great Workshop, organised by Nigel and Geraldine.
28th February 2014 - A very enjoyable evening was had by our members, when we had some dogs in for a Portrait Workshop

7th February 2014 - We had a excellent evening with Graham & Jay showing us the pros and cons off off camera flash.

26th January 2014 - At todays Memorial Trophy competition, we did ok with all of our entrys receiving 17/20 marks, scroesheet can been seen here.

17th January 2014 - A excellent and constructed evening was had tonight, going through our individual prints for a forthcoming club competition.